The clavichord is a small keyboard instrument which was designed for private enjoyment. It’s more expressive than the harpsichord, but it’s very quiet. In recordings, clavichords may actually seem to be quite loud. This is because they tend to be recorded at fairly high volume levels.

Clavichord strings are struck by small pieces of metal called tangents. The tangents remain in contact with the strings while the keys are pressed. 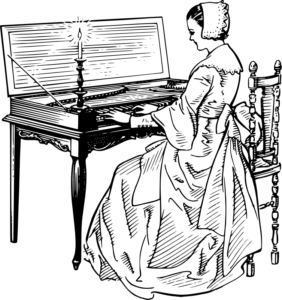 In the following video, Steven Devine introduces the clavichord… from his kitchen!

As shown briefly in the video above, a clavichord allows the performer to produce a type of vibrato. That means making the note ‘wobble’, as a violinist can do. On the clavichord, this is known as bebung. Here is a very good demonstration:

There are two types of clavichord, fretted and unfretted. In this next video, the difference between the two types is explained and demonstrated. 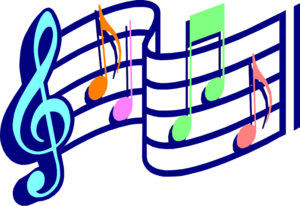 The first pianos were developed in the early 1700s by an Italian instrument maker called Bartolomeo Cristofori. We’ll take a look at some early pianos in another post. But first we’ll explore two important types of keyboard instruments which existed before the piano. Let’s start with the harpsichord.

The harpsichord has a brilliant sound which could be described as ‘fizzy’. This is because the strings are plucked, rather than being struck with hammers. A harpsichord mechanism consists of a wooden structure called a jack, which contains a quill or a small piece of hard leather (or plastic, as in many modern harpsichords). If you have a chance to play a harpsichord you will notice a slight resistance on the keys just before the quills ‘ping’ the strings.

Following the boom in historical instrument performance from the 1970s, the harpsichord has enjoyed a great revival of interest. However, its main drawback is its limited dynamics. Key pressure doesn’t make any difference between soft and loud, as it does on the piano. So, to give the performer more variety of sound, harpsichords often have two sets of strings, and many have two keyboards (or manuals).

In the following video, Steven Devine, keyboardist with the Orchestra of the Enlightenment, demonstrates a 2-manual harpsichord.

e are some videos which show harpsichord jacks in action:

Ever wondered what happens when you press a key on a piano? The piano key mechanism is fascinating because it has to do a number of things very quickly.

1) As a key goes down, the hammer travels towards the string (or strings: most notes on a piano have 2 or 3 strings).

2) At the same time as the hammer is moving, the damper (the block of felt that stops the strings from vibrating) is released so that the strings can sound.

3) When the hammer hits the strings, it has to bounce off very quickly. This is very important. If the hammer stayed on the strings instead of bouncing off, you would just get a dull thud instead of a proper musical note.

4) When the key is released, the damper goes back into position to stop the note from sounding. (That is unless the damper pedal – the one on the right – has been pressed, in which case the dampers on all the strings of the piano will be off).

The whole process (for an upright piano) can be seen in the video below. From 0:09 you can see the hammer bouncing off as a longer note is played. Use the video settings to select a slower playback speed if you would like to see it in more detail.